Helping a child and their family following sexual abuse 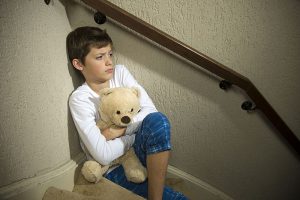 Children come to know themselves through the stories others tell about them.  For Danny, 7 year old boy the stories told about him at school and at home centred on him being ‘naughty’, a ‘problem’, ‘disobedient’ child.  Danny had been excluded from Prep for hurting children and had a history of exhibiting inappropriate sexualised behaviour towards other children – consequently the story of ‘don’t trust Danny’ was dominant.    Danny lived between two homes, living with his Dad one week, living with his Mum the other.  Both parents were highly concerned about Danny’s behaviour, stressed, questioning what they could do, desperate for things to change.   I first meet Danny in the waiting room, sitting in between his parents.  He had a look on his face that reminded me of my own face, as a child, sitting, waiting nervously outside of the School Principal’s office.  The family followed me into the therapy room.  Danny’s eye noticed Bryan sitting in the bean bag.  Following Danny’s lead, I introduced Bryan, not as a stuffed bear, but as my consultant, highlighting that he had the ‘power of listening’.  Ever so quietly, Danny uttered that he had ‘powers’ too. Following Danny’s lead I shared that Bryan and I had a book dedicated to recording children’s powers. Danny was enthused to add to the book of powers.  With the help from his parents, much of the session was dedicated to exploring in rich detail ‘Danny’s powers’ which included ‘power of reading’; ‘power of time travel’, ‘power helping’, ‘caring for others power’ and ‘speed powers’. In an effort to make these powers more known and utilised, we co-authored a letter to school about the discovery of Danny’s powers, including powers he wanted to grow.

Danny credited his parents with having powers too and what effect these powers had on his life.  A sense of pride seemed to fill the space between family members, perhaps for the first time in a long while.  Now far more comfortable and confident in conversation, Danny asked me with curiosity ‘what powers do you have?’ – ‘The power to help families shrink problems’, I replied.

Two months on and my work with Danny and his parents continues.  My interventions have become multifaceted – supporting the family to learn new ‘powers’ in communicating with each other, increasing understanding, connection and empathy, integrating past traumas more fully, discovering the motives and logic behind Danny’s inappropriate sexualised behaviour, supporting the parents capacity to respond more effectively and working closely with school.  All the while, Bryan, my bear consultant, has continued to listen.  Indeed in a recent session Danny began to disclose his own experiences of sexual abuse and years of secret keeping.

The path to shrinking problems with the family has not been straightforward however over time  Danny’s behaviours have improved, with a reduction in aggression and no incidences of inappropriate sexualised behaviour.  Danny has learnt that when he has the ‘problem touch’ feelings to seek out a trusted adult.  Danny is spending far less time ‘outside’ the principle’s office, he has earned the trust from others to mix with his peers in the playground and had his first ever sleep-over.  Both parents are now more confident, more united, more attuned and more able to go on.