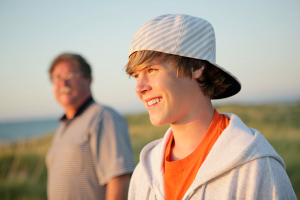 Jake is a 14 year old boy, standing proud, about to receive a ‘Certificate of Achievement’.  In the ‘audience’, sits his proud parents, younger siblings and his favourite teacher. This is an awards ceremony few would have predicted…

4 months earlier I was referred to work with Jake.  At the time the referral was made Jake was diagnosed with Oppositional Defiant Disorder, prone to violent outbursts, low self-esteem and described as the ‘problem’. Prior to therapy, family life had been stressful.  Both parents felt helpless, humiliated and ineffective, often arguing in front of the children, and being on different ‘pages’ when it came to discipline.  Fearful of how the children might behaviour in public, the family rarely left the home.

Jake’s parents participated in ‘Tuning into Teens’ parenting program.  The program helped the parents learn new skills to identify and manage their own and Jake’s emotions in ways that helped them remain close and keep communicating.  When Jake’s behaviours became aggressive and challenging the parents were supported to engage in ‘Non-Violent Resistance’.  Instead of pleading, arguing or punishing in the heat of the moment the parents engaged in strategies to de-escalate the situation and respond proactively later.

Whilst initially resistant to therapy, Jake quickly warmed to the process and began to learn and develop new skills in emotional regulation.  Jake engaged in joint sessions with his Dad.  Jake and Dad began to repair past hurts and strengthen their relationship.  Both learnt they had an interest in fishing, art and animals which became opportunities for bonding and fun.

Changes occurred over the course of 4 months.  Reactive discipline reduced, replaced by more consistent confident united parenting.   Jake was less aggressive, was getting along more with her teachers, peers and family members.  The family no longer felt ‘trapped’ in their own home and began to plan day outings and camping trips.