Helping an Adult with symptoms of PTSD with Radical Exposure Therapy 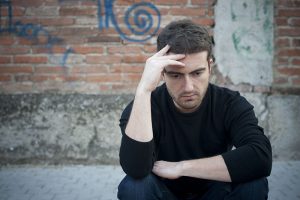 John was 24 years old when he presented at my office on a cold and windy August day.  Over the last two years John had been experiencing spikes in anxiety, feelings of worthlessness and not wanting to be around others.  After trying other mental health professionals without success, a concerned friend recommend he contact me.

John completed a Post Traumatic Stress Disorder form (see the Trauma Specialist page for a free download) .  His score was 72 and indicated that he was experiencing severe symptoms of PTSD.  He sat in a moments silence – confronted by the score.  I learnt that two years earlier John had been involved in a home robbery where he was violently assaulted.  As he spoke his eyes moved to the ceiling, his speech became short and breathless – he was reliving his past in the present.  I used grounding techniques to help John regulate and feel more in the present.

I asked John to rank out of 10 how disturbed he would feel now if he was to talk about the robbery in detail.  He replied he would be at a 10.  John shared that whilst trying to ignore and avoid talking and thinking about the incident he repeatedly experienced nightmares of the violence, waking up at 3am – the time in which the robbery had taken place.

John desperately sought relief from the memories of the robbery that continued to fuel his symptoms of PTSD.   It was at this point I introduced Radical Exposure Tapping – a memory processing therapy that helps to rapidly reduce the disturbing  and negative affects that goes with traumatic memories.

Interested to understand the process, I explained to John that I would ask him to bring the memory to mind while asking him to answer the following questions:

1 – What do you see?  What is the image or picture that is most disturbing? (Sensory)

2 – What is the physical sensation that is felt and where do you feel it in your body? (Somatic)

I outlined that I would ask John to copy me in doing a tapping sequence, along with repeating back his key words and a self-acceptance statement ‘I deeply and completely accept myself’, followed by a deep breath in and out at the end.  I indicated that at times the level of disturbance would rise, like a wave, however I welcomed this as it meant that the disturbance would pass quicker.  I shared that if disturbance was still felt I would incorporate any new keywords that emerged and resume another round of tapping.  When a state of calm had been reached I would conduct one last round of tapping to incorporate positive cognitions with the memory.

For the next 30 minutes John and I identified 5 disturbing ‘scenes’ that related to the home robbery,  identifying his somatic, sensory, negative cognitions of self along with taking him through the tapping sequence.  With each scene RET quickly reduced his ten out of ten level of disturbance to a zero.

Towards the end of the session I asked, “When you think of this memory in the future, instead of automatically thinking about yourself as a failure, weak and a person who was going to die, how do you want to think of yourself?…I am…. John replied “I am alive, I am a strong person, I put myself on the line to protect my family, it happened, I have moved on”.  One final round of tapping with John helped incorporate the positive cognitions with the memory.

Three weeks later John arrived at my office for his check-in.  He quickly reported that his sleep had improved, sleeping solidly through the night and that he had got back into spending more time with his friends and family.  In contrast to three weeks earlier, John spoke about the robbery in a matter of fact way.  Filling in the PTSD Civilian Form helped capture a dramatic reduction in PTSD symptoms for John – from 72 to 30.

Twelve months on and John continues to make progress, viewing the day he arrived at my office one cold and windy August day as the turning point and RET as the catalyst for his change.